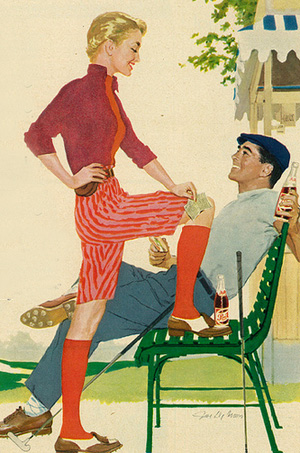 The G spot may be controversial in sex but not in golf. Elusive but unmistakable, it is the bodily sensation of perfect peace heralded by a sound, followed by a vision, a vision of a ball propelled in space by Apollo, suspended, uncanny, out of time, in silence, in harmony, a doper’s quiet nodding high, spiritual, the fulfillment that has always been there just beyond reach but here it is, all we ever dreamed in a moment of seamless contact. Is that too much to ask? The golf Skinnerians intone that it is the shot that brings us back, the random reinforcement that is the source of inextinguishable pursuit.

Undoubtedly they have a point although they forget the power of illusion, faith, and Don Quixote. Phillip was never allowed in his mother’s living room but the first time he stepped on the verdant mounds of a golf course he was invited not only to play in those fields but to swing away driving balls towards holes. The erotic aspects of the game are not disguised, they are not distortions, and only the notion of a return is an illusion. That first click of compressed explosion, that first flight beyond reason, is the strongest evidence yet of forbidden powers. What a long time to wait for omnipotence.

He watched the ball roll to a stop at a new frontier of his game.

He allowed the emotionally restrained grimace smile that the game associates with character. Then, not wanting to allow his restraint too obvious a measure of inverted grandiosity he said, “It was a good one.” Then he sheathed his driver, dropped it in the bag, and studied the next golfer to tee up his shot, as if nothing had happened at all.