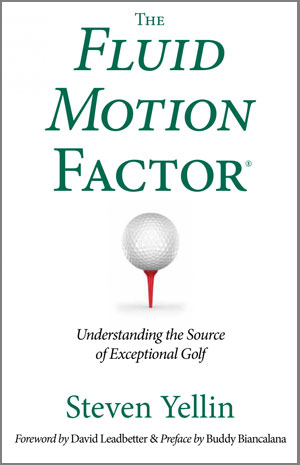 Steven Yellin, in his new book, The Fluid Motion Factor, takes an inordinate amount of time to say a few simple important things. He argues for developing a very soft intention in relation to the outcome of every golf shot, for developing a relaxed mind that trusts the mechanical skills involved in the golf swing that have already been internalized–without having to think about them, or emphasize one over another, or “focus” too intently on carrying out any part of them. He believes that the golf swing is a whole “thing,” with—at best—a fluid and implicit integration that requires no special attention or intention other than a type of “letting go” of both in order to access what is already there.

Accessing what is already there. That’s Yellin’s mantra. The metaphor he returns to repeatedly is that all that a golfer has learned about mechanics is like money in the bank. It’s there. It’s dependable. In the fluid golf swing, we make withdrawals without worrying that we’ll some day run out. He likes to quote Tiger Woods who once said, after a great iron shot, “I took the club out of the bag and I didn’t remember anything until I saw the ball land on the green.” No swing thoughts. No hyper-focused concentration. Just a “zone” dominated by the fluid motion factor.

Yellin’s book is a good critique of the culture of modern golf obsessed with “fixing” what is “broken” in the golf swing. In this sense, it takes its place alongside books by Tim Galloway, Michael Murphy, and Fred Shoemaker. While it is unfortunate that Yellin doesn’t attribute any of his ideas to these authors, his intellectual debt to them is significant.

Here’s the problem with The Fluid Motion Factor. First and foremost, it is for the very low-handicap golfer. The book begins, in a sense, after a golfer has finished “working on his swing,” a moment Yellin defines as one in which the golfer “understands the parts and wholeness of the swing,” and the point at which he or she is “consistent on the range and most of the time on the course.”

How many of us can say this? Yellin thinks it is a majority of golfers. I think it is a small minority. For example, the sine qua non of a reliable and consistent swing is the ability to make solid downward contact, the divot invariably appearing beyond the ball (most golfers intellectually know this). Does Yellin really think that most golfers have this ability “in the bank?” What most golfers have in the bank is a golf swing in which key elements—the position of the club head, swing path, alignment, connection to the target, and solid strike are inconsistent or even partially invisible to the golfer. As a result, most swings contain several small but vital compensations and corrections that are non-conscious, sometimes resulting in a good outcome, other times not. In other words, an inconsistent and unreliable swing.

Yellin is correct that a good swing is in our bodies. But he has almost nothing to say about how that “good swing” can be developed and then put into our bank accounts.

There are people like Fred Shoemaker at Extraordinary Golf who show and teach how a deeper quasi-meditative awareness – learning and then trusting the body —is the key to developing these mechanics to begin with. For example, Shoemaker has asked thousands of his students, including some first-time golfers, to set up and throw a golf club 25 yards to a target in the fairway. He films the swing. Then he sets down a ball and asks them to hit it, just as they might on the range or course. He films this swing. When compared, the first swing looks uncannily similar to a powerful, almost professional golf swing. The second, the one with the ball, looks awkward, weak, uncoordinated, and out of synch. The first swing was the body’s natural adaptation to an intention that was target-focused. The second was the body’s natural adaptation to the intention to make contact with the ball.   Like Yellin, Shoemaker believes that the body knows what to do. His approach however, is based on building a swing in which each dimension is developed through deep awareness exercises aimed at discriminating what is efficient and what isn’t. The result is trust and the kind of soft-focus awareness that Yellin advocates.

My point is that The Fluid Motion Factor is radical in the sense that it confronts the current golf culture of “fixes and faults,” but quite limited and derivative in the application of the theory. He dresses his ideas up in a simplistic language of neurophysiology that is intended to confer scientific legitimacy to his ideas but, except as metaphors, are of little help to the average golfer.

Yellin’s book is valuable and I salute his courage in confronting the corruption of current magazine-based golf instruction. Ultimately, however, his contribution is severely limited in its applicability to the average golfer struggling to improve his or her game.